Uzbekistan is a country with a big source of vital historical architectural memorials of Central Asia. There are so many cities in which the passed epochs has left amazing treasures in the territory of the country, and majority of the memorials are in the best conditions and carries the mysteries of history. Tashkent ("The Stone city"), the capital of the state, is situated in the sub mountain area of Tyan-Shan, in the very centre of the prosperous oasis of the valley of the Chirchik river. "The Stone city" has been the cross section of various routs of trade and that caused the diversity of culture and religion in Tashkent. The ancient names of Tashkent are Shash and Binkent through which the caravans passed slowly and step by step on the Great Silk Road. In the past, most of the beautiful palaces were built in the city among the green gardens, shady roads and mosques. Despite the dynamic development in the city, Tashkent remains the main centre of culture and arts. There are a lot of well-saved unique and historical mosques, mausoleums, the Orthodox churches which indicate the great tolerance and respect for the culture of the other nations.
One of the best mausoleums in the city is a memorial of the ancient architecture – the ensemble Shaykhantahur that consists of three mausoleums: Yunus-Khan (15th c.), Shaykhantahur (15-19th c.), and Kaldirgach-Biy (15th c.) with its twelve angled cupolas in the shape of pyramids. Besides, the mausoleum of Zaynutdin-bobo (16th c), Suphi-ota (16th c.), and the architectural ensemble of Khazrati-Imam (16th c.) are the worth seeing objects of the city. You should certainly visit presently restored medrese Kukeldash, medrese Barak-Khan and the medrese Abdul-Kasim-Eshon (16th c.), the scenic mosques like Djami (16th c.), Mirza Yusuf (19th c.), and Khayrabat-Eshon (18-19th c.), the mausoleum Kaffali-Shashi (15th c.), and Tilla Shaykh Mosque, part of Complex Khast-Imam.
As you arrive in Uzbekistan, we recommend you to visit the Museum of Arts in the capital, Tashkent. The museum includes more than 4000 expositions (exhibits) (also the artefacts of the period of Sughds, statues of Buddhism which are more than 1000 years old, and the various items of Zoroastrianism) and the History Museum of Uzbekistan. Applied Arts Museum of Uzbekistan was established in 1937 and displays about 30 thousand items in its exhibitions. In the very centre of the city one can see History Museum of Temurids (The Museum of Amir Temur) which is unique with its rich exposition. The old part of Tashkent – "Eski-Shahar" ("The Old City") despite the powerful earthquakes regularly taking place in this seismic active zone managed to keep lots of old buildings and roads in good condition.
The oldest and largest bazar "Chorsu" situated next to the medrese of Kukeldash is the richest shopping centre of the city, the incarnation of all the legends about the Ancient East.
"The grindstone of Tashkent" is the most beautiful building located in the centre of the residence of the governor Rakhmanov (1869-90 y.). This is a tower with a clock and complements the Spass tower of Kremlin in Moscow. About 15 kilometres in the south of Tashkent lies the village Zangiota where one can visit two ancient mausoleums of Zangiota and his wife Ambar-bibi (Kambar-ona, 15th c.) surrounded by a large garden. The complex includes the memorials built in 15-19th centuries, the medrese (18-19th c.), mosque with minarets (1914-1915 y.) and the ancient graveyard.
As it was long centuries ago, Tashkent has still kept its status as the largest cultural centre of not only Uzbekistan but also Central Asia. There are 9 theatres (including the Theatre of Opera and Ballet named after Alisher Navoi, well known all over the world), concerts and exhibitions halls, swimming pools, libraries, parks, gardens and fountains (built with the greatest architectural professionality) in the city. The TV tower of Tashkent is the highest object in Central Asia with the height of 375 metres.
All these are places that must be travelled to, and felt the air of freshness together with blow from the history. 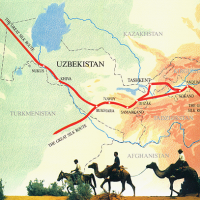 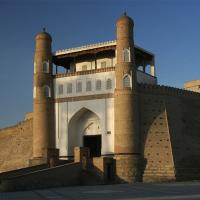